What was cut from the 1966 American version of

This may be called a minor cut, but it does soften the dramatic impact of the story.

After Kimba drives the giant grasshopper into the volcano, he slowly returns with a heavy heart to the other animals. 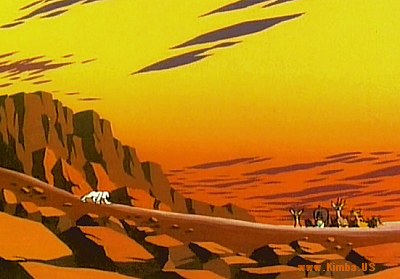 This shot is present in the American version, but for only 4 seconds, accompanied by cheers from the other animals. In the Japanese original, this shot lasts for 20 seconds, in total silence, until Kimba says that the grasshopper is dead. American TV does not like silence, but in its original form this is a very affecting moment.