What was cut from the 1966 American version of

The first cut is minor: When Kimba first finds Speedy sleeping and dreaming, 6 seconds of Speedy "blowing bubbles" is cut from the American version, presumably because in the US people blow Zs instead of bubbles.

The second cut is a practical joke on the audience, but it can't work in the American version because it depends on familiarity with the Japanese show opening. When the cubs discover the eggs about to go over the waterfall, the scene suddenly changes to the show opening! (Because the Japanese opening starts with a shot of a waterfall.) The theme continues into the show title and keeps going, making it appear that some problem at the TV station has made the show start over. Then, a cartoon Osamu Tezuka bursts in, and demands things be set right. The story then resumes exactly where it was interrupted. 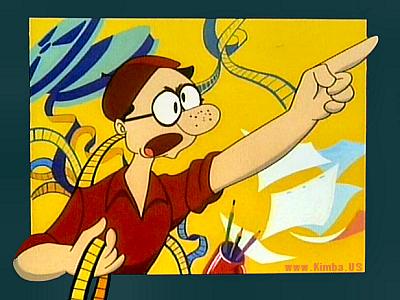 Note: The 1993 Canadian version suffers from inept editing at this point, leaving in some, but not all, of the footage of the joke.