For us English-speaking folks, the 1993 Canadian dub of this episode has a much more sensible and complete script than the original American dub.

In the Canadian version, we learn that when the farm is threatened, Dan'l suggests abandoning it in favor of returning to Caesar's (Panja's) ways: stealing farm animals for the carnivores to eat. This produces a very angry reaction from Kimba.

More significantly, the Canadian script reveals the fact that the meat-eating animals discover they like eating the invading grasshoppers. This is something Kimba is not in favor of, but he feels he has no choice but to allow it, and Dan'l reminds him that it is a step in the right direction. The original, American dub completely covers up this aspect of the story, which not only conceals how deeply Kimba's convictions run (he doesn't even want insects to be killed), but it reduces the significance of the gift of a meat substitute in episode 26, "A Revolting Development". 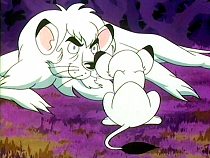 There is also a nice song in this episode that has never been heard outside of Japan. In the original American dubbed version, Billie Lou Watt gives an excellent spoken performance of the scene, as Kimba turns to his only physical relic of his parents, his dead father's hide, asking for guidance in the toughest situation he has faced to date. The 1993 Canadian version deleted this scene altogether. You can see the original here: RealVideo clip.