Kimba was born of wild parents but he also lived with people for some time while he was a cub. When he returned to the wild, he had a dream of uniting people and animals in peaceful co-existence.

Has your heart been won by the white lion? Then... 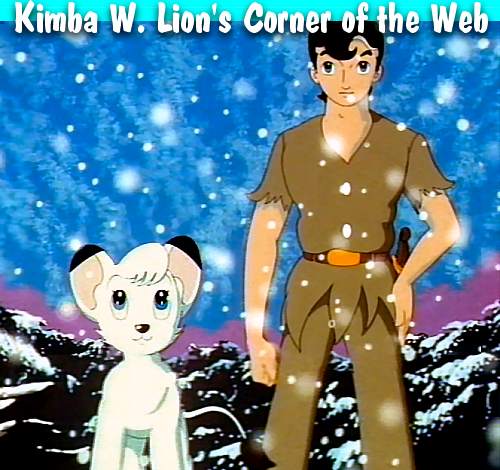 INTELLIGENT LIFE IS ALL AROUND US

Kimba The White Lion is a wonderful, captivating series. When first shown in America, it was praised universally for its stories of love, compassion, and strength of character. For me, the most wonderful thing about it was its message of understanding for all life, for the need for unity between humans and animals. Kimba The White Lion has a heart and soul that has awakened and strengthened a love for animals in millions of people. This is a show that deserves to be seen by every person in the world.


This site has information about all the different appearances of Kimba The White Lion on TV and in the movies, but the main focus is on the original Kimba. The original Kimba started on TV in Japan in 1965 as "Jungle Emperor", and came to the US in 1966 as "Kimba The White Lion" This series has now had two different runs on TV (in English); 27 years elapsed between the two runs and the soundtrack was changed for the more recent run on TV. This makes things a little confusing, since people naturally want to know about the version of Kimba that they have seen. Since the stories and the drawings were the same both time, a lot of what you see on this site applies to both versions. When I need to refer to one or the other, I will use the term "original" or "1966 version" for the first Kimba, which had Billie Lou Watt playing Kimba, and "re-dubbed" or "1993 version" to refer to the newer Kimba, with Yvonne Murray as Kimba. When possible, I will use the logos from each show to make things clearer:

To show you what I mean by all this, lets...

The ORIGINAL Kimba is available on DVD.

If you're new... or looking for memories...  click here
for some background info and pictures.

For those who want all kinds of details:
click here for A History of How Kimba The White Lion was Brought to TV in the 1960s

Click here for All kinds of Kimba stuff you can buy!